Ajpu Blog
A blog about sustainable development for a better tomorrow

The most endangered marine mammal is about to go extinct

The vaquita porpoise, an endemic species of the Gulf of California is the most endangered marine mammal species, according to the last count done in November 2016, there are only around 30 vaquitas left.

The vaquita is being wiped out as collateral damage a bycatch in the gillnets used to fish another endangered species the totoaba. A fish that can grow up to 2 meters in length and whose bladder is in high demand in Asian countries especially China.

Illegal poachers can get thousands of dollars for the bladder in Asian markets. Smuggling has become such a lucrative endeavor that it is referred to as “aquatic cocaine”. The vaquita is just another victim of the insatiable appetite for wildlife products, just like shark fins, rhino horns, elephant ivory or tiger products, especially from Asian countries.

The story behind the vaquita is a sad one, the species was discovered about 50 years ago as they started to find dead vaquitas entangled on the fishing nets. Since then scientist has seen their numbers shrink at an alarming rate. Today it is the most endangered marine mammal on the planet with just a few dozen specimens remaining.

In 2017 an emergency plan was created by a team of international experts, organizations and the Mexican government to rescue and temporarily relocate the remaining vaquitas to an ocean sanctuary in the Upper Gulf of California. This project is known as Vaquita CPR (Conservation, Protection, and Recovery).

“Although CPR faces a lot of uncertainty and is highly risky, WWF recognizes it as a necessary action to save the vaquita from extinction,” said Jorge Rickards, CEO of WWF-Mexico.

One of the biggest obstacles to overcome is finding the Vaquitas as they are a shy and elusive animal. The International Vaquita Recovery Commission (CIRVA, to use their Spanish acronym) came up with an ingenious plan to find them using US Navy-trained dolphins.

Since 2015 the Mexican government has enacted a no-fishing zone across the vaquita and totoaba’s principal habitat. An area that covers 11,595 square kilometers.

Despite the ban and the constant patrols done by Mexico’s navy and federal police, illegal fishing still continues, gillnets are still being used and, vaquitas continue dying.

Recently scientists have begun capturing vaquitas and placing them on fishing pens to protect them from poachers and try to get them to reproduce in a safe environment. Sadly the first attempts to keep them in captivity have failed, as the vaquita suffers a lot of stress in captivity and the specimens that have been captured have died when placed in captivity.

Advanced genetics also brings some hope to vaquita’s survival. By gathering DNA samples scientists hope to be able to help with reproduction efforts by converting cells to sperm and eggs, and hopefully, in the near future bring the species back to life.

Vaquita’s survival chances seem to be limited and to give them a real fighting chance gillnets and illegal fishing need to stop. But as long as the demand for totoaba’s bladder continues to rise vaquitas extinction seems almost certain.

Despite the challenges, there are many people and organizations committed to saving the vaquita. Sea Shepherd, the marine wildlife conservation organization has sent one of their ships, the Sam Simon to patrol the area against poachers and remove illegal nets. The WWF is helping out with the acoustic monitoring system, which is crucial to help locate the remaining vaquitas. 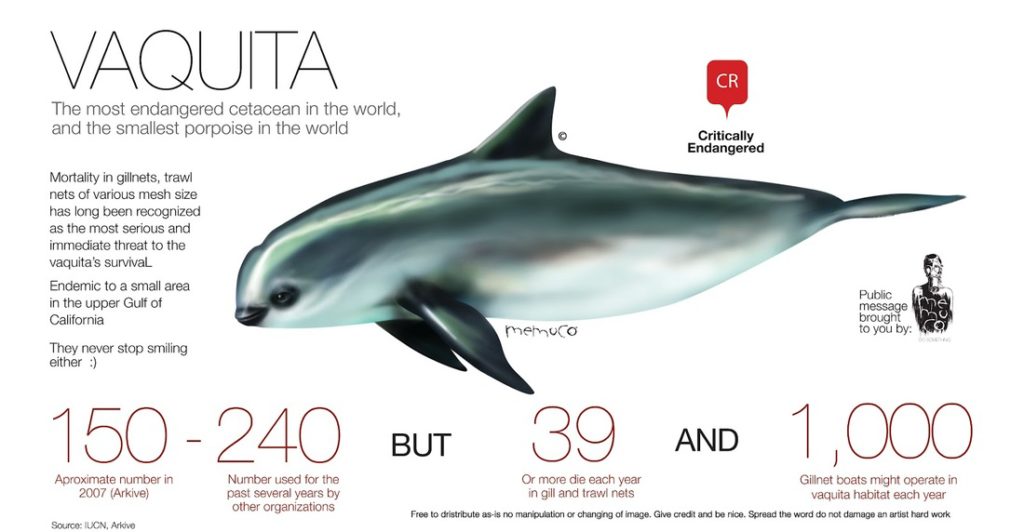 Continue Reading
conservation
1,466
Share FacebookTwitterReddItWhatsAppPinterestEmailLinkedinTumblrStumbleUpon
Subscribe to our newsletter
Sign up here to get the latest news, updates and special offers delivered directly to your inbox.
You can unsubscribe at any time

4 Plants you can grow to help save the bees.

All about the bees

Ajpu blog is a site dedicated to gather and share information on building an inclusive and, sustainable future for people and our planet.

The most endangered marine mammal is about to go extinct

This website uses cookies to improve your experience. We'll assume you're ok with this, but you can opt-out if you wish. Accept Read More